In early May in 1998, I walked Hadrian's Wall in Northern England. The blend of history, culture, nature and my home-away-from-home at the Ashcroft Guest House in Haltwhistle was very pleasant and inspiring. Especially outside the tourist season. Pradoxically, I'd found all motivation, inspiration and information for the walk on the Internet.
The original song was about as long as the remains of the wall, so I've only included a few musical stones.

Well, Bob Dylan sang Times are a-changin',
now the borders and walls are torn down,
but there's still one that lasts,
there's a wall from the past,
you can walk there from Haltwhistle town.

Well, the wall may be taller in China,
there's a wall in Jerusalem, too;
But I think you'll find Hadrian's finer,
If you want, I will walk it with you.

And the places have wonderful names there,
Like Haltwhistle, and Once or Twice Brewed,
And they've even had their claim to fame there:
Here's where Hollywood filmed Robin Hood.

There is plenty to see in this region,
From the wall you'll almost see it all,
Roman legions would roam
here 'til Rome called them home, 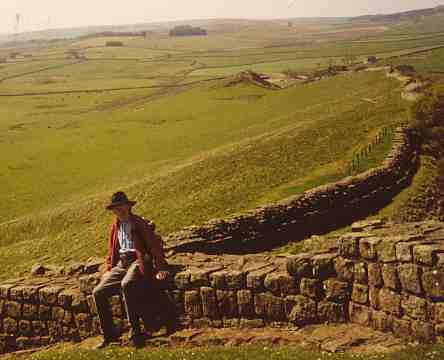 now Norwegians are walking the wall.

You can drive through Haltwhistle in seconds,
But you're welcome to stay for a while,
And in case it should rain,
there's an hourly train to Newcastle or even Carlisle.

If you find this a little too charming,
And you're one for the rough and extreme,
Stand in St James' Park with Toon Army,
and cheer for the visiting team.

Yes, the Romans brought civilization
to their empire's northern frontier,
and it's still quite a civilized nation,
and they still brew some civilized beer.

And the English schools still teach you Latin,
it may seem a bit useless to learn,
I suppose it's just their
wish to be well-prepared
in case Hadrian's men should return.

You can go for a picnic, it's pleasant
where the pastures are juicy and green,
and the lambs and the rabbits and pheasants
will remind you of better cuisine,

But you'll hardly be hungry since breakfast
at the Ashcroft with Geoff and Christine,
but you may feel inclined to enjoy a good pint
for a while at the Milecastle Inn.

Now you may prefer Waltzing Matilda,
or a waltz by the old Viennese;
But I sing for the Roman wall builder
I sing Hadrian's Waltz, if you please.

Walk the wall, and your problems seem distant,
maybe things will work out after all -
'less your problems are just as resistant
as the wonderful Hadrian's Wall.